Torturer. Slave-driver. These are some of names I call my physical therapist, Urvashi. But actually, she's been great. She works me hard but always makes me laugh.

So I'm a little sad that Thursday I finished with PT.  I'm also worried: I still have a lop-sided gait; a ten-minute walk exhausts me; and my knee is very, very wobbly. But Urvashi says that I'm much stronger, and I can do most of the exercises by myself. She also said that my gait will improve as my sensation returns, and maybe I will need more PT down the road.

I like Spaulding, and I have great therapists. But the highlight of my trip is going to the bathroom.

Until about three weeks ago, I didn't have enough strength or coordination in my right hand to rip off the paper towels. Now I can finally do it. It's so satisfying.

At Spaulding I went to a  "Stroke Reunion" on Sunday with my mom. I met some young-ish stroke survivors, including a woman who had kids about the same age as my kids. It was strange to listen to other aphasic people.

One of the speakers--he was a stroke survivor--called us "our Tribe."  I like that. Calling us  "our Tribe" has a  mystique,  like a secret handshake. It's not far from the truth, if we can shake a hand at all. (Neal also suggested the term "stroke-empowered woman.")

In the news, there was an obit for the actress and stroke survivor Patricia Neal on Sunday in the NYTimes. There was a great quote:

"When Ms. Neal could not understand a Beatrix Potter book she was reading to her son, her husband told her not to mind because The Tale of Pigling Bland was 'Potter’s toughest book.'"

Indeed.
Posted by Grace Carpenter at 11:01 AM No comments:

Still not quite ready for prime time

It's been six months since my stroke.

Last week I added two accomplishments: tying my shoe laces, and hugging Neal--with both my arms.

But I wish that my progress could be faster.

This evening, for example,  I had some sequencing problems. Here's a piece of  pie that I served myself with ice cream: 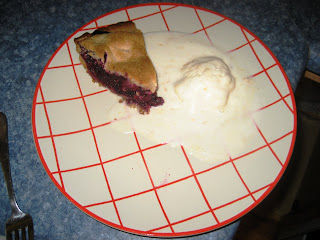 Note to self: microwave the pie then serve the ice cream.

(Thanks to Brain Injury X-Posed: The Survivor's View for inspiration) .