On Thursday I spent the morning and early afternoon with my daughter.

It was the first time since the seizure--almost 10 months ago--that I was alone with her for more than an hour or two.

We read. I wrote a couple of emails. She played with her dollhouse. We went for a short walk. We had gooey sunbutter sandwiches for lunch.

"I'm bored," she said, as morning turned into afternoon.

It was a boring, perfect day. 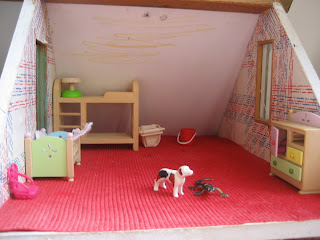 I saw the photos of Gabrielle Giffords the other day. The camera focuses on Giffords' beautiful smile. Her mother is the background, maybe a little care-worn, but smiling.

I don't know if we have many photos of my mother and me together from those six weeks when I was at the hospital and in Spaulding. But my mother was there, every day. If we had a photo, probably you would see my mother smiling proudly, maybe after she had pointed out my latest accomplishment.

For me, a lot of those days blur together: the parade of visitors, the endless procedures, the night awakenings. I do remember that after other people had left, often my mother would stay. As I drifted into and out of consciousness, she sat in a chair by the foot of my bed, quietly reading magazines.

Every so often I would open my eyes, on the cusp of sleep, wondering if she had left.

She was always still there, quietly sitting.
Posted by Grace Carpenter at 7:25 PM 7 comments:

When I was at Spaulding, a music therapist visited me, partly to see if it would help me with my aphasia. She wheeled me down the hall to the lounge, and set up her guitar and music stand.

Not really. But I knew some of songs, so I nodded. We started to sing--mostly humming, for me--but I thought my voice sounded awful. I made a face of disgust. The therapist looked worried, and flipped through her music.

"Do you know 'You Are My Sunshine'?" she asked.

I wanted to tell her, Sometimes I used to sing that song when I was putting the kids to bed. I also wanted to tell her that the lyrics are actually pretty sad. Especially the Johnny Cash version. I think he had recorded it after his wife, June Carter Cash, had died, and his voice was ravaged from old age and heartbreak.

I started to cry.

The music therapist scurried out to find some tissues. I could see her through the glass door, and a few minutes later I saw her coming back down the hall. She tried to open the door. It was locked.

Don't worry, I wanted to tell her. It wasn't like I needed to be somewhere. I started to laugh.

She pantomimed that she would be right back. She returned with another staffer, who looked puzzled. Still no key. There was more commotion in the hallway.

Now I was really laughing, so much that I was tearing up from laughter.

Finally, someone from the maintenance crew arrived. He found the right key, opened the door, and left. The music therapist wheeled me back to my room, apologizing the whole way back down the hallway.

She was apologizing so much, in fact, that she didn't realize that that was one of the best therapy sessions I ever had at Spaulding.
Posted by Grace Carpenter at 11:43 AM 5 comments: