Thanks for the Hamburgers, Mitt Romney

One day when Neal came home from work--about four months after the stroke--he asked about my day, as usual: did anyone visit? Did anyone bring dinner? I said "yes" to both.

"Who brought it?" he asked.

I considered the question. I was very happy to see the woman who dropped off dinner. Often she and I used to walk back from dropping our sons off at school. Although I didn't know her well, I enjoyed her sense of humor. I used to know her name, her son's name, and her two-year-old daughter's name. Neal usually relied on my memory for names and faces. But we didn't have a back-up plan in case of aphasia. Now I tried to think about how to tell Neal who the woman was.

"So... a woman dropped off supper?" he tried to confirm.

"Like Mitt Romney," he repeated it, puzzled. "This person.... was a politician?"

"This person... lived in Belmont?" he said hopefully.

"Yes! Probably," I said. Although that wasn't exactly what I wanted to say, probably there were about five Republican parents in our school district, so that narrowed down the field. "You met the guy," I  said. I hoped that Neal would remember he met the husband, and that they had a common acquaintance through Neal's work, and the coworker was Mormon.

I sighed with relief. At least one mystery--who brought dinner--was solved. Except that we still couldn't remember the woman's name that evening, I think, even between the two of us. Somehow I did convey that family was moving away, soon, and that I was sad to see them go.

Now I remember her name.

Amber, if you're out there, I miss you. The hamburgers were great.
Posted by Grace Carpenter at 4:49 PM 6 comments:

Usually I think my memory was unaffected by the stroke.

Then it happens: something I used to do that comes back, almost without effort--and I realize that part of myself has been missing for almost two years.

Like last week, I was rummaging around the fridge, and saw that we had some beets that were looking old. My family loves beets. Neal and I love the taste; the kids love fact that eating beets makes their pee turns red.

I used to cook beets every so often--pre-stroke--after the kids were in bed. I would start them simmering, and them do something else: do emails; pay bills; write. It was very satisfying.

When I saw the beets last week, my hands got to work. I got the beets out from the fridge, turned the water on (with my right hand!) and put the beets on to boil. I put the timer on, then browsed the Web. Neal and I took turns checking on the beets, making sure that they weren't boiling over. When they were done, I slipped the skins off, and then put them in a container for salad for some other day.

There is no punchline here. No funny story about weird things I forgot to do, or a story about the kids' reaction. It's just about this feeling I have, that my mind is like a bicycle slowly changing gears upwards. 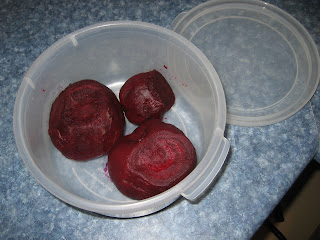