A friend's mother had a stroke about nine months ago, and I've been getting updates about her for a while. I saw my friend a few weeks ago, and she mentioned that her mother has recently having gastrointestinal problems. My friend didn't go into details.

It brought back uncomfortable memories. After the stroke it could have been so much worse, but still: I have felt sick to my stomach so many days since.

I had one real GI crisis about four or five months after the stroke, when I was directed to take iron supplements, and Neal and I both misunderstood the directions. It took me about a week to figure out why I felt so awful: I was taking about 3 or 4 times the correct dosage. I had alternating bouts of diarrhea and constipation, and constant nausea for about 6 weeks. I lost more weight, which wasn't a good thing.

The whole stroke recovery has reminded me sometimes of being pregnant: a few periods of crisis, then this off-and-on stuff.  The threat of nausea is always there, even though I almost never get truly sick. My appetite has been very unpredictable. I've often felt like I have a low-grade stomach bug for more than two years.

In general, I'm feeling so much better these days. On bad days, though, I remind myself: I can deal with this feeling--the feeling that my body is a bit of a stranger to me. I'm getting to know this new version of myself. It's like a very, very long gestation. 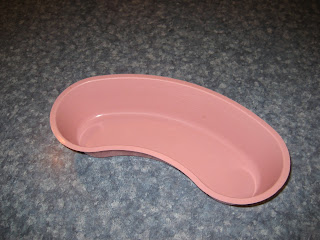 Posted by Grace Carpenter at 9:15 AM