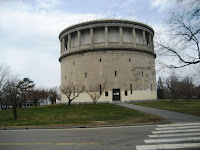 There's a water tower in my town that looks like the pantheon. It's on top of one of the highest hills in the town, and it's about a half mile from my house. I hadn't walked to the water tower since the stroke.

When my kids were little and I couldn't stand one more trip to the playground, I would trudge up the hill with the kids in the double stroller and go to this small circular park. It has great views of Boston. It also has crabapple trees, which are just right for little kids to climb on, and the grass has tons of dandelions to pick. My kids were also intrigued by the series of manholes in one area of the grass, and we would hop from one manhole cover to the next.

Last Sunday I asked the kids if they were interested in walking up to the water tower. My son--who's acting more like a teenager every day--had other plans: hanging out with his friends, playing Mindcraft, and going to the hardware store with his dad. My daughter--who sometimes begs me to go on a walk--of course had no interest in walking that particular day.

So I walked up there by myself. Afterward I was pretty exhausted. According to my pedometer, I took about 2800 steps. I've been on longer walks, but not by much.

Maybe I can bring grandchildren there one day.

Posted by Grace Carpenter at 9:31 PM