For the last two weeks I went to Spaulding everyday to try to recover more movement for my right hand. I did a program called Modified Constraint-Induced Movement Therapy (M-CIMT).

Warning: this post is much longer than usual. I wrote this summary since some stroke survivors I know were curious about this program, especially since the price is so reasonable.

Every day from 1 - 3pm, five stroke survivors, including myself, gathered around a big table. After our occupational therapist (OT) led us in some stretching (both hands), we were asked to put our less-affected hand in our lap.

Then the fun began. 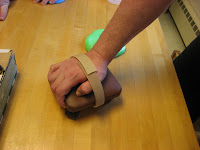 We would warm up by rolling a ball to each other for about 15 minutes. Then the OT and aide opened the big cupboards behind us and brought out the toys: jumbo pegboards, little pegboards, puzzles, games, kitchen utensils, beads big and small, cards, etc. There were other toys that only an OT would have: hand putty in all grades of resistances, adaptive writing tools, stacking cones, the Amazing Clothespin Contraption, and my favorite, a little "skateboard" for a hand. 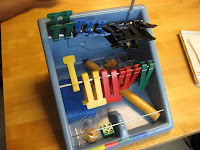 The OT would picked out the things that she thought would help the most, depending on the individual person and problem she was working on at the moment. Usually we worked alone or in pairs, and then switched to new activities after 15 or 20 minutes.

Every so often if someone was struggling to remember to use only their affected hand, the OT would bring out the big mitt to constrain their "good" hand. Other times we did bi-manual activities, so the mitt was irrelevant. 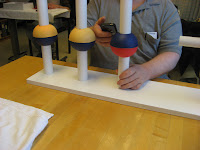 After two hours most of us were exhausted. Before going, we had to bring out our checklist for activities for the evening or next morning, for a total of two hours. For instance, some of activities I worked on were: turning pages; stringing beads; tying a bow; playing scales on the piano. For another person, the activities might include drinking from a plastic cup with a handle; eating finger foods; wiping a table with a circular pattern; using a rolling pin with both hands.

We were all very interested to see how different our problems are--and also similar. For instance, I and another person were always dropping things. Another person could inadvertently crush a water bottle in his hand; his challenge was to pry his fingers off it. My sensation is diminished, and another person reported that his sensation had just returned after two years, apparently very suddenly. Most of us had shoulder issues.

As a 47-year-old, I was the youngest participant, but no one could be called elderly either. Most of the people were working before stroke. (I wasn't working at the time of my stroke. But parenting young kids is hard labor, either paid or unpaid). I think every one was at least one year post-stroke. 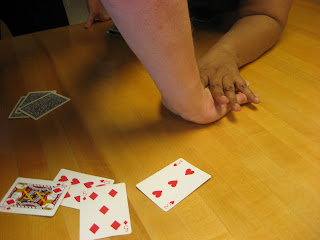 My decision to participate was partly a financial decision. Although my hand is partly functional, I need a lot of therapy before I will be anywhere near back to doing normal household tasks. (Playing piano--which I used to do--is another whole level) . We had two options to pay for the group: use insurance, or private pay, which had a flat fee of $40 per session ($400 in total). Given that there's a chance that my insurance won't authorize more than a handful of visits this year, the group bought me a lot more therapy for my buck.

By contrast, the Taub Clinic, the pioneer of CIMT, charges $6000 for two weeks of half-day private treatment. 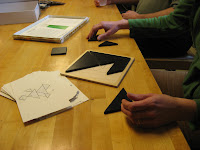 Our OT told us: "this isn't a magic cure." You have to work incredibly hard. But hopefully this can help people by jump starting their recovery, or this phase of their recovery. For me, the best part was that I got a lot of ideas to challenge myself at home. The moral support from other stroke survivors was incredibly helpful.

As always, the therapists at Spaulding were fantastic. They were so skilled with figuring out how to help each individual the right mix of encouragement and sensitivity. And humor.

Posted by Grace Carpenter at 9:05 PM